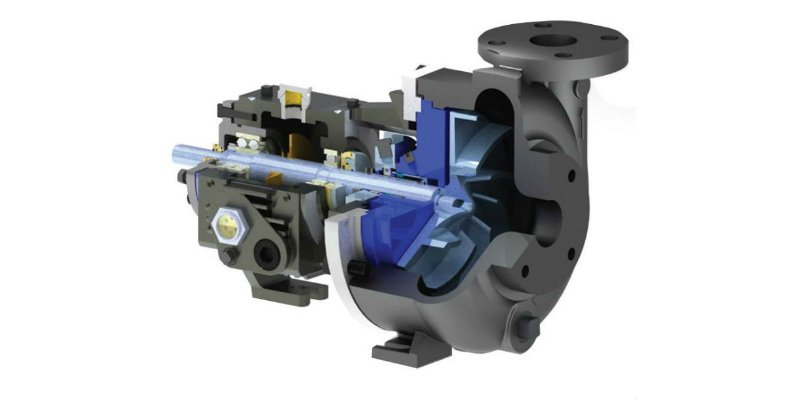 Both the mechanical and hydraulic performance of a centrifugal pump will be affected when handling a solid liquid mixture. Solids in suspension in the liquid cannot absorb, store, or transmit pressure energy, as can a liquid.

Pressure exerted by a fluid on the walls of a container is caused by the bombardment of molecules freely moving in a confined space. Molecules of a solid being restricted in their movement by the molecular attraction cannot participate in maintaining or transmitting pressure energy, nor, can they increase their own kinetic energy when surrounded with liquid carrying the pressure energy. Therefore, solids in suspension cannot convert their kinetic energy into pressure and it is therefore largely wasted.

Solids are moved through the pump almost entirely at the expense of the energy imparted to the liquid by the impeller. For that reason, the total head of a given pump handling a solids-liquid mixture is considerably lower than that for the pump handling liquid alone.

Transportation of solids in liquid results in additional hydraulic losses due to the relative motion of the liquid with respect to the solids, which in a sense are obstructions to the flow of the liquid. The pump efficiency decreases rapidly when concentrations of solids in the liquid is increased.

The above facts explain the corrections which must be made to both the water head-capacity and the water horsepower when pumping a solids-liquid mixture. Centrifugal pumps are required to handle many types of industrial liquids such as paper pulp or stock, slurries of all types, sewage, viscous liquids, and those which carry crystals in suspension, and those containing gas, air, or foam.

There are several precautions which must be taken when applying pumps for handling suspended solids in the pumped liquid. They are:

The factor limiting the ability of the pump to handle solids is not the percentage consistency but rather the fluidity and available suction head. Any consistency which will flow freely to the impeller can be pumped successfully with a properly applied centrifugal pump. The presence of entrained air or foam will further reduce the capacity of the pump, and an additional correction must be made.

In general, when pumping viscous liquids, the head and capacity at the best efficiency point (BEP) are reduced by additional frictional losses in the pump and the brake horsepower increases, owing primarily to increased disc friction losses.

Experimental work and testing done by pump manufacturers and correction curves as published by the Hydraulic Institute for pumps whose capacities at BEP are greater than 100 GPM are the basis used for determining the performance of a conventional design of centrifugal pump handling a viscous liquid when its performance on water is known.

The affinity laws hold for all viscosities, but with less accuracy than for water. Usually, the efficiency is better at higher speeds; therefore, when speed increases, brake horsepower increases less than the speed cubed, and head more than the speed squared. It will be noted that the head at shutoff remains essentially the same which results in steeper head-capacity curves for higher viscosities.

The efficiency of a pump is 100% minus the losses. Since this is determined by the pump design, the subject of losses may seem to be one for the designer. It is handy, however, for the engineer applying the pump to have a good understanding of where these efficiency losses occur and what can be done to decrease them.

Efficiency losses in a pump may be roughly divided into five classes:

Many people tend to speak of leakage losses as if they are the major cause of loss in pump efficiency. Although leakage does cause a sizeable loss, it is not always the major loss, and in fact, is sometimes much smaller than the other losses.

IFS Has Modular Process Solutions for Most Process Fluids

IFS is a leading producer of modular process systems for the O&G, Power Generation, and Air Quality industries. Our staff engineers are more than equipped to recommend and/or tailor a modular solution for your pumping needs.

Contact us online today to see how we can serve your process pumping needs!